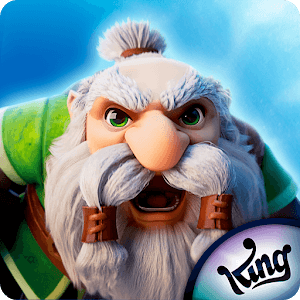 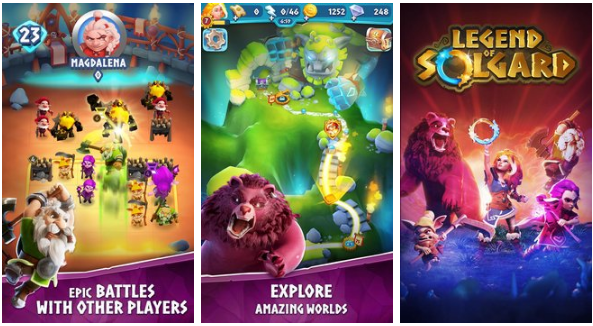 The description of Legend of Solgard

In this unique RPG, combat enemies and bosses with the creatures you collect, level up your hero powers and loot treasure from Norse legend!
Join Embla in her epic fight to stop the end of all worlds and establish her as one of Solgard’s most powerful heroes. Use strategy to battle hordes of ice enemies in the Hero Arena, claim bounties on legendary villains, defeat epic Bosses and win the war against evil to become a true legend of Solgard.

Solgard is turning to winter, its creatures trapped in ice crystals and its worlds turning to ice. Ragnarok, the end of the world has started and only Embla can fight it. With the powers of The Sun Goddess, it is up to Embla to gather an army of creatures and together, battle and conquer the icy evil that threatens Solgard…

Grow an army of creatures, explore the worlds of Solgard and win the war against eternal frost one battle at a time while discovering the secrets of Norse legend! In this epic new RPG, strategy and creatures of legend are the best assets for you to dominate the arena.

In this RPG adventure:
• Test your skills and fight other heroes in the Hero Arena
• Form guilds with other players and fight together to battle epic Guild Bosses
• Collect allies and treasure from Norse legend
• Grow and power up your hero and army
• Use Tactics and Strategy to fight with an army of creatures
• Develop your hero with godlike powers
• Battle with epic fantasy creatures and bosses

The war to prevent Ragnarok has begun and each battle will require your best strategy.
Are you ready to fight epic battles and enter the pantheon of Solgard’s ancient heroes? Download this new RPG now and be part of the legend!

Legend of Solgard is completely free to play, but some optional in-game items will require payment.

By downloading this app on your mobile you are agreeing to our terms of service; http://about.king.com/consumer-terms/terms
You must be connected to the Internet to access full game features.

Easily sync the game between devices and access full game features when connected to the internet.

Facebook Comments Box
Tags:apkgame
We use cookies on our website to give you the most relevant experience by remembering your preferences and repeat visits. By clicking “Accept All”, you consent to the use of ALL the cookies. However, you may visit "Cookie Settings" to provide a controlled consent.
Cookie SettingsAccept All
Manage consent