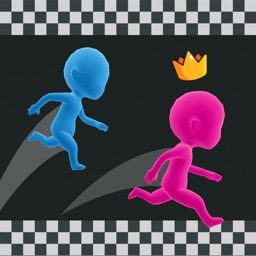 Compete with others and get the real parkour experience.

Jump from wall to wall, climb ropes, slide to get faster, flip to jump higher , grab to swing, use monkey bars to not fall.

There are dozens of maps and all require different set of skills.

Increase your ranking by beating your opponents.  You can also customize your character; Skin, Clothing, Dance, and many more!

Unlike the races you often see in marathons or the Olympics, the race in Run Race 3D requires you to climb and jump like a parkour athlete. Why? The track of the game is not like other normal racetracks. It includes walls and countless obstacles. So not only based on speed, but you also have to use ingenuity, power to overcome obstacles of the game.

Run Race 3D has the same style as other IO games like Hole.io or Crowd City. Each race, you need to defeat 3 other opponents. They are all online players like you. The rules are extremely simple, and each game lasts less than a minute. The important thing is that you have to find a way to get faster and defeat them, to become the champion. Also, don’t forget to collect coins on the race.

You need to make a choice

Some maps do not have a fixed route. Sometimes, you will be faced with a choice between many different paths (the game gives directions by arrow). Although this is not always true, sometimes some roads help you get there faster than the rest. A right choice will give you an advantage over other competitors.

When climbing walls, doing double jumps helps you jump higher. After jumping from the ground, jumping once more will immediately help you make a double jump. This is extremely useful when you are at a map with lots of walls and many obstacles. Also, don’t forget to use mechanical devices like a spring mattress. They will push you quite a distance away instead of running.

Facebook Comments Box
Tags:Run
We use cookies on our website to give you the most relevant experience by remembering your preferences and repeat visits. By clicking “Accept All”, you consent to the use of ALL the cookies. However, you may visit "Cookie Settings" to provide a controlled consent.
Cookie SettingsAccept All
Manage consent